The Pros and Cons of Corporate Tax

Simply put, corporate tax is the tax levied on the profits of a corporation. The taxes are calculated using the corporation’s taxable income, which is the cost of goods sold, selling and marketing, administrative expenses, depreciation, research and development, and any other operating expenses subtracted from the gross revenue generated. These taxes vary greatly throughout the world, and some countries are known as tax havens due to their extremely low rates.

The corporate tax burden can be diminished by deductions, loopholes, and government subsidies, so the rate a corporation really pays, known as the effective corporate tax rate, is often lower than the legally mandated rate. 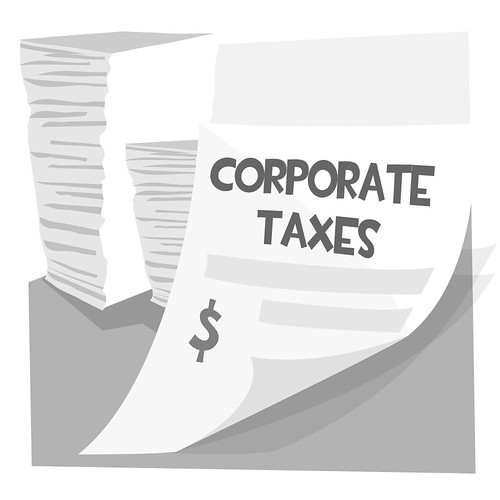 In turn, the shareholders also pay taxes on the dividends received from the company. This is often referred to as double taxation. A benefit of the C-Corp is personal liability protection from issues arising due to litigation or business debts. A C-corp has stocks and the percentage of overall stocks you own determines the percentage of your ownership in the corporation. Stocks are easily bought and sold through the various stock exchanges.

Next are the S corporations, which are similar to C-Corps in that the personal liability is limited, but the issue of double taxation is avoided. S-Corps are known as pass-through entities, meaning all deductions, credits, income, and losses filter through to the individual shareholders and are reported on their tax returns instead of the corporation being taxed as its own entity. An S-Corp must have only U.S. citizens as shareholders, not other corporations, partnerships, or non-residents of the country. S-Corps are also limited to one class of stock and 100 shareholders.

A certified benefit corporation, also known as a B corporation, is created to benefit society, but as a for-profit business. B-Corps are relatively new and are, in essence, a designation for C-Corps and S-Corps, stating they’re legally bound and dedicated to the betterment of society and the environment. Rigorous standards are in place that must be met to be considered a B-Corp.

A few such standards are a minimum score of 80 on the B Impact Assessment, a legal commitment to shareholders and society as a whole, and publicly reporting your scores at BCorporation.net. B-Corps maintain their original C-Corp or S-Corp standing in addition to being a B-Corp.

A closed corporation is a privately held business with only a few shareholders, such as a private corporation, incorporated partnership, or incorporated family business. Shares are not publicly traded, which complicates the selling of stock to raise capital, but the owners still maintain the limited personal liability that comes with incorporating.

A non-profit corporation incorporates for charitable, religious, educational, political, social, scientific, or other benevolent reasons. This type of corporation also has very strict requirements set on it. A non-profit corporation cannot distribute profits to its stakeholders, directors, or officers, but it can pay wages or compensation for work performed and services provided. Non-profit organizations can file as such with state and federal governments, granting them tax-exempt status.

Currently, the federal tax rate for corporations in the United States is a flat 21%. Previously, the maximum U.S. corporate tax rate was 35% until the Tax Cuts and Jobs Act was signed into law by President Donald Trump in 2017 and went into effect in 2018. Corporate tax returns are usually required by March 15th, instead of April like individual returns. A six-month extension may be requested by corporations, allowing them to file their completed return in September.

Installment payments based on estimated tax liability are due mid-April, June, September, and December. Form 1120 is used in the United States for reporting corporate taxes. Online filing is required for corporations with more than $10 million in assets.

One of the central issues, as it relates to corporate taxation, is double taxation. C-Corps can be taxed on the corporation’s income, and then the individual shareholders are also taxed on their share of the corporation’s net income in the form of dividends received. In order to avoid double taxation, a company can file as an S-Corp and have all income go to the business owners, alleviating corporate tax altogether.

There can be, and often is, benefits to paying corporate taxes versus additional individual income tax. The inherent deductions to corporate tax, such as medical insurance provided to families, and fringe benefits, like tax-deferred trusts and retirement plans, offer obvious financial benefits. Also, losses are much more easily deducted as a corporation. For a corporation, the full amount lost can be deducted.

On the other hand, a sole proprietorship must supply proof of intent to earn profit prior to deducting losses. Finally, any net income earned by the corporation can stay within the corporation, allowing for potential future tax advantages and future tax planning.

If you have questions about corporate taxes or need business consulting services, contact the knowledgeable team at Pasquesi Sheppard. We can lend out accounting expertise to your business to help your business grow. Contact us today at 847-234-5000 or via our secure and convenient online messaging service.